You haven’t been to Lisbon yet? It’s about time! The historical capital of Portugal is bursting with things to do, see and eat. To break it down for you, we have gathered 5 ultimate must-do’s. Boa viagem!

If the national eating in Portugal is fish, the national cake has to be the Pastel de Nata! The round custard cake was invented in the suburb of Lisbon, Belém, in 1833, and the very same bakery still produce thousands of cakes every week! In fact it’s so popular that there’s a line outside of the bakery on both weekdays and weekends, but if you come early, there’s a chance you’ll get a table. Unfortunately, it’s not possible to book a table in advance. Once you get inside, the procedure is quite simple: order a couple of Pastel de Nata and a cup of coffee and simply indulge in the beautiful historical surroundings. 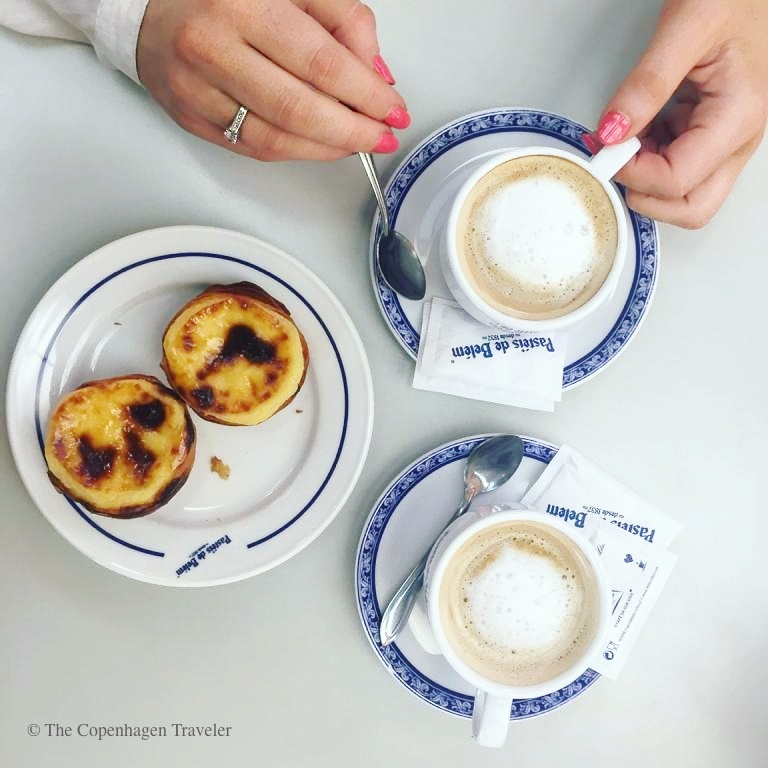 If you’re looking for traditional experiences to blend in with the locals, then a candlelight dinner accompanied by traditional Fado is a must-do! Fado was born in the streets and restaurants of Lisbon’s riverside neighbourhoods and in 2011 it was listed by UNESCO as Intangible Cultural Heritage of Humanity.
Do yourself a favor and find a small ‘Fado’ establishment serving traditional Portuguese food. I recommend Clube de Fado in the neighborhood of Alfama. The food is great and you’ll get the chance to enjoy some of Lisbon’s best Fado performers live. It’s true what they say: no visit to Lisbon is complete without riding a tram! Do like the locals and jump on the charming, old-fashioned trams lurching around the narrow (and steep!) streets of the city. There are five different tram routes heading either East or West, but before getting tired of just thinking about which ones to take or not (I’ve already gotten lost twice!), take this tip:  the E15 tram is very useful for tourists as it goes directly from the city center to Belém, and the E28 runs through the charming Alfama district. Most trams operate until 11PM and it’s possible to buy a ticket onboard (a single ticket is €2.85) UNLESS you buy a Viva Viagem pre-paid ticket.

Have lunch at the Ribeira Market

Nestling in a street close to the train station of Casa de Sodré and just a stone’s throw from the riverside, the Ribeira Market (or Mercado da Riberia) has been serving up delicious food since 1882! The city’s largest food market is open daily from 5AM-2PM and it’s a true gem for gourmands looking for the best food and drinks in Lisbon. Visitors will find a hearty selection of food stands serving everything from fresh fish and seafood to risotto, cheese and Asian specialities. Whatever you’re in the mood for, it probably exists at the market! I recommend ordering a plate of mouthwatering tapas or a dish with local piri-piri (traditional spice brought to Portugal by the African community). Don’t forget a caipirinha with fresh lemon and crushed ice. I could come here for lunch every.single.day.
PS. The food hall with 750 seats opened in 2014 and represents some of Lisbon’s best chefs and restaurants.
Mercado da Ribeira, Avenida de Julho 49, Lisbon Enjoy the view from the Santa Justa lift

If the ‘Elevador de Santa Justa’ seems familiar, it might be because it was built by Raoul Mesnier - the apprentice of Gustave Eiffel (the father of the Eiffel Tower!). Nevertheless, the elevator offers the best view of Lisbon’s breathtaking skyline. It was built in 1902 and still serves as Lisbon’s only vertical street lift. It was steam powered until 1907, but runs on electricity today. Get there early to avoid the crowds (it’s a popular tourist destination, but still worth the visit!). A ride is approximately €5, which is a little too pricy in my opinion - bear in mind that you can save €3,50 by entering the platform from the top (behind Convento do Carmo). By doing that, you’ll miss the elevator ride, but still get the view from the viewing platform. I'm Regitse, a 32-year-old mother, creative soul, writer, traveller and hospitality geek dividing my time between Berlin and Copenhagen. This is my virtual home and where I share my passion for hotels, culture and design. Welcome - I hope you'll feel right at home!